The Government Finance Officers Association (GFOA) has recognized the City of Slidell with its Distinguished Budget Presentation Award.

The award is based on a public agency’s budget containing four essential elements: a policy document, a financial plan, an operations guide, and a communications device. In addition to a proficiency rating in all four categories, there are 14 additional criteria each public entity must meet.

GFOA has more than 22,500 members, and more than 1,700 participants in its Budget Awards Program. 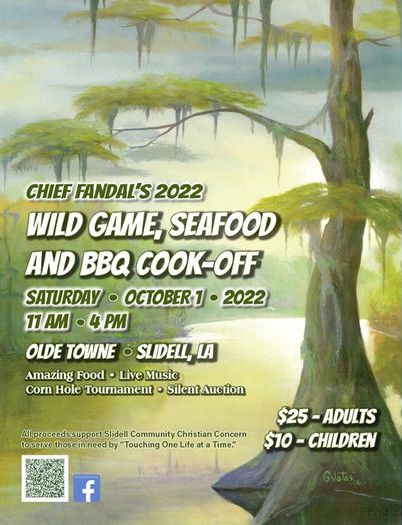 Once bollards are in place, any vehicle that is inside the perimeter of the safety zone will not be able to exit Olde Towne until after 6 p.m., when the event ends and bollards are removed. This is for public safety and allows cooks, vendors and entertainment to start setting up safely inside the safety zone. “Special Event No Parking” signs are placed throughout Olde Towne.

Once the bollards are in place, no vehicles will be able to enter or leave the safety zone in Olde Towne, so please don’t park or leave vehicles in Olde Towne after 2 a.m.

Get ready for another exciting season of great concerts in Heritage Park when the City of Slidell’s popular Bayou Jam fall concert series returns on Saturday, October 1, with a performance by Amanda Shaw at 5 p.m. Admission is free.

“Bayou Jam concerts are a great way to celebrate as a community,” said Slidell Mayor Greg Cromer. “We invite you to come enjoy a free concert in Heritage Park with your family and friends and start your Saturday night right here in Slidell!”

Amanda Shaw is an energetic fiddler who blazes trails with her clever songwriting and exciting performances. With over 20 years of experience, she captivates audiences of all sizes – from intimate listening rooms to national television audiences. Shaw blends authentic Cajun culture with endearing local charm, delivering shows that burst with Louisiana flavor.

Concert‐goers are invited to bring their chairs, blankets, ice chests and picnic baskets to the park to enjoy the free concerts. Concessions will not be sold this season.

UPDATE – 9/22/22, 9:00 am: The Boil Water Notice has been lifted. Public Ops will be notifying affected residents and businesses.

The following addresses are under a Boil Water Advisory due to loss of pressure on the water distribution system: 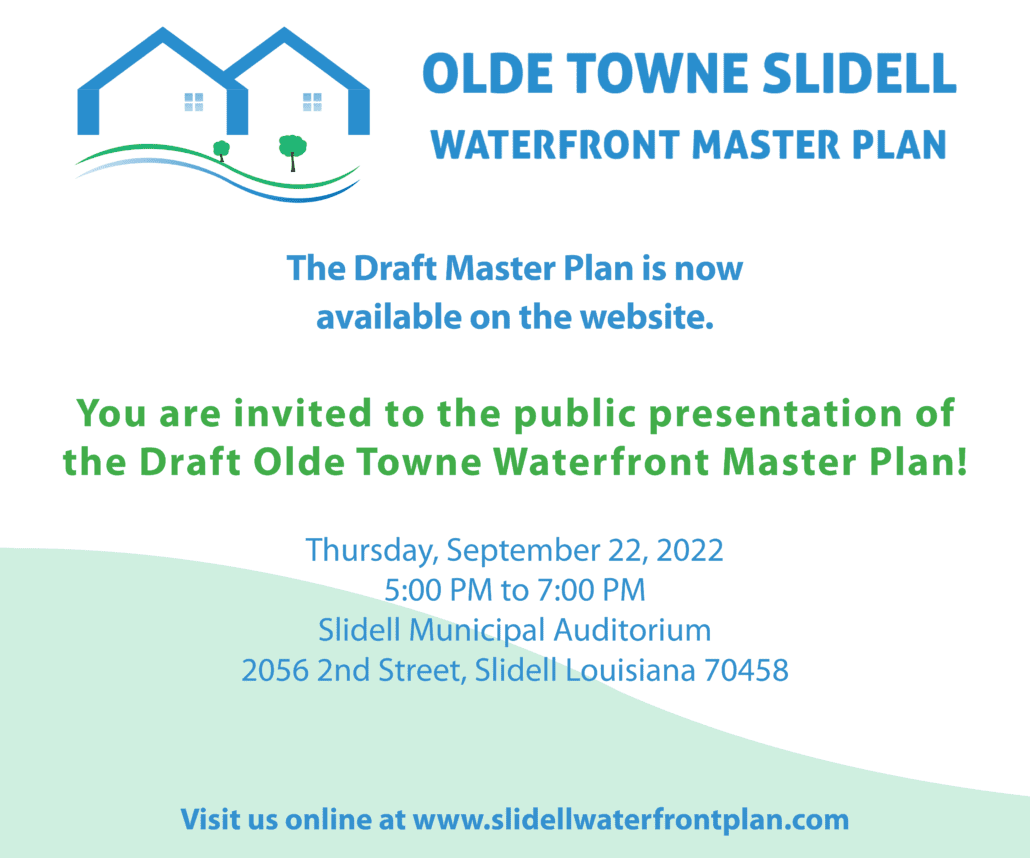 Escherichia coli bacteria were found in a single sample station of the drinking water supply on Grafton Drive in the City of Slidell.

No other sample site areas tested throughout the City produced a positive result for E. Coli, including immediate upstream and downstream locations on Grafton Drive from the impacted sample station.

Bacterial contamination can occur when increased run-off enters the drinking water source (for example, following heavy rains). It can also happen due to a break in the distribution system (pipes), or a failure in the water treatment process.

What should I do? What does this mean?

No immediate action is required at this time, as the most current testing no longer shows the presence of E. Coli in the affected area. The Louisiana Department of Health advised the City of Slidell that the boil water advisory issued by the City on September 9, 2022 for the affected area is no longer necessary.

During the time the boil water advisory was in effect for the affected area, all impacted residents were advised to boil water from the City’s water supply, and let it cool, before using, as boiling water kills bacteria and other organisms in the water. If you did not receive direct notification of a boil water advisory, your residence/business was not affected.

E. Coli are bacteria whose presence indicates that the water may be contaminated with human or animal wastes. Human pathogens in these wastes can cause short-term effects, such as diarrhea, cramps, nausea, headaches, or other symptoms. They may pose a special health risk for infants, young children, and people with severely compromised immune systems.

The symptoms above are not caused only by organisms in drinking water. If you experience any of these symptoms and they persist, you may want to seek medical advice. People at increased risk should also seek advice from their health care providers about drinking this water.

What is being done?

The latest testing from the impacted area indicates E. Coli is no longer present in its water supply, and no other areas of the City’s water system have tested positive for E. Coli during this time period.

The City of Slidell, in consultation with the Louisiana Department of Health, continues periodic testing of its water supply at sample locations throughout the City. The City shall provide appropriate notice in the event future issues arise concerning similar bacterial contamination.

For more information, please contact Donnie Marshall, Director of Operations for the City of Slidell, at 985-646-4258 or 1325 Bayou Lane, Slidell, LA 70458. General guidelines on ways to lessen the risk of infection by microbes are available from the EPA Safe Drinking Water Hotline at 1-800-426-4791.

Please share this information with all the other people who drink this water, especially those who may not have received this notice directly (for example, people in apartments, nursing homes, schools, and businesses). You can do this by posting this notice in a public place or distributing copies by hand or mail.

SLIDELL, La. – Louisiana Economic Development reaccredited the City of Slidell as a Louisiana Development Ready Community in a ceremony Thursday in St. Tammany Parish. Originally recognized in 2009, Slidell was the 11th city to receive the designation during the pilot stage of the program.

“As a legacy member of the LDRC, Slidell has helped to set the pace for this important program, which now boasts 52 member communities across Louisiana,” LED Secretary Don Pierson said. “This reaccreditation signals that Slidell leaders and their collaborating partners will continue to work for the city’s long-term success. Their commitment to LDRC principles sends a clear signal to investors that Slidell has what it takes to create competitive advantages for the businesses that locate there.”

St. Tammany Corporation CEO Chris Masingill and his team led Slidell in the process of updating their strategic plan and securing the reaccreditation.

“Slidell is open for business, and I am proud of the work we do every day on behalf of the families and businesses that call Slidell home,” Mayor Greg Cromer said. “Slidell was one of the first-ever certified Louisiana Development Ready Communities in our state, and this timely update to our city’s original LDRC plan from a decade ago shows our continuous commitment to improving the lives of our residents and attracting new opportunities that will help our community continue to flourish. Thank you to St. Tammany Corporation for taking the lead on updating this plan for our city.”

““We are proud to be a part of this project, and updating this plan reinforces Slidell’s commitment to being a destination where businesses and talent can thrive,” Masingill said. “Being able to show the community’s values and priorities through this Slidell-specific plan and its implementation is a powerful tool when making the business case to companies that want to start up, relocate, or stay in Slidell and St. Tammany Parish.”

For more information about the LDRC program, visit the LED website or contact LED Director of Community Competitiveness Stacey Duvic at stacey.duvic@la.gov or 225.342.4703.

About LED
Louisiana Economic Development is responsible for strengthening the state’s business environment and creating a more vibrant economy. It is the only state agency in the U.S. accredited by the International Economic Development Council, boasting award-winning programs like LED FastStart, rated the No. 1 customized workforce training program in the U.S. 13 years in a row. In 2021, LED attracted 64 new economic development projects representing over 18,100 new direct and indirect jobs, 9,700 retained jobs and more than $20.5 billion in new capital investment. Explore how LED cultivates jobs and economic opportunity for the people of Louisiana and employers of all sizes at OpportunityLouisiana.com.

Due to rising fuel costs and pursuant to the City of Slidell’s Solid Waste Disposal agreement with Coastal Environmental Services, the Slidell City Council has authorized a fuel surcharge recovery fee not to exceed $2 per month. The fuel surcharge will appear on the September 2022 sewer and water bills and on subsequent bills.

This decision was made by the Slidell City Council after careful review and public input. The surcharge is based on the consumption of fuel that is used on routes inside the city limits and is determined by the actual cost of diesel over $3.50 per gallon. The fee will vary month by month, depending on the cost of fuel, and if the price goes below $3.50, the surcharge will go away unless the cost of diesel rises again.

For more information on what to do during a Boil Water Advisory: https://foodsafety.ces.ncsu.edu/…/CDC-What-to-Do-During…?