Randy Fandal is a fourth generation Slidell native. He graduated from Slidell High in 1978 and the Louisiana State University Law Enforcement Institute in 1987.  He has served and protected the community of Slidell and the State of Louisiana for over 36 years.  Randy began his law enforcement career with the Slidell Police Department in 1980. He worked for Slidell Police Department 10 years serving as a patrolman, detective in the criminal investigations division, patrolman in the traffic division and as an emergency medical technician. In 1990, Randy completed the Louisiana State Police Academy. He graduated number 1 in his class and received the Douglas M. Millet Award for Outstanding Leadership. During his career with the Louisiana State Police, he served as the Lieutenant overseeing the statewide LSP Criminal Patrols Program which seized illegal contraband from vehicles traveling on the highways and interstates. Under his command the criminal interdiction program received national and international recognition from the Drug Interdiction Assistance Program for having the largest seizure of crystal myth in the United States resulting from a traffic stop- over 500 lbs.

In 2011, Randy retired from the Louisiana State Police and hiked the entire Appalachian Trail from Georgia to Maine over 2,184 miles. It took him 6 months and 2 days to complete and in the process he raised over $5,000 for the Troop L Grant A Wish Program.

In 2013, Randy returned to the Louisiana State Police as an investigator in the Narcotics Division. On December 10, 2016, he was elected Slidell Chief of Police. 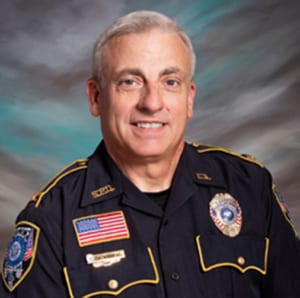