Kick off the holiday 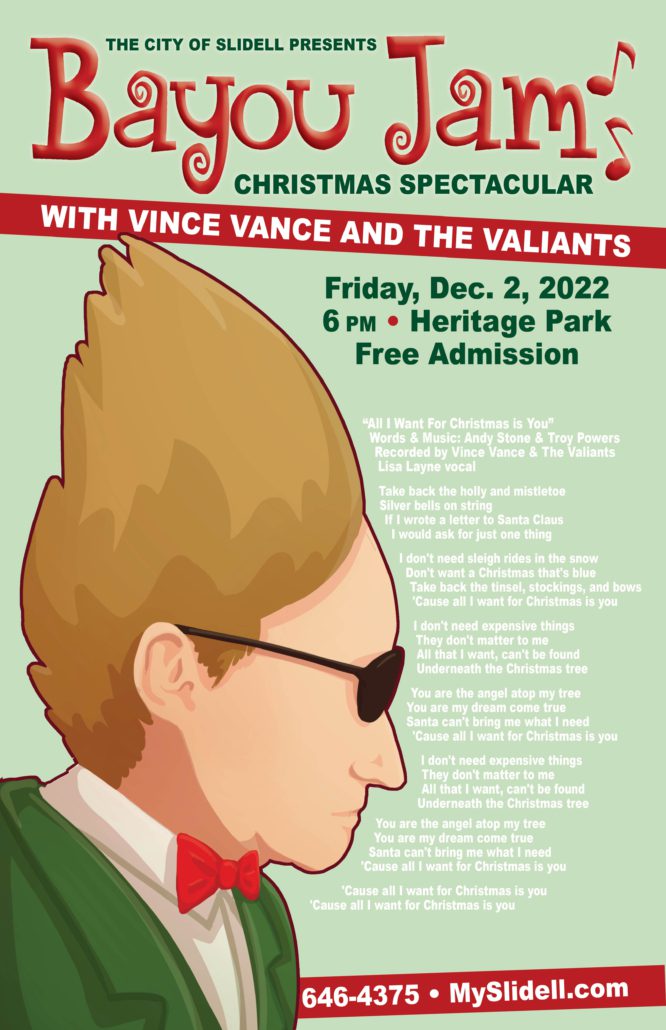 season with the King of Christmas! Vince Vance and the Valiants return to Heritage Park on Friday, Dec. 1 for the City of Slidell’s Bayou Jam Christmas Spectacular starting at 6 p.m. Admission is free!

“We unfortunately had to cancel the Bayou Jam Halloween Bash with Vince Vance back in October due to inclement weather. He promised that he would do a bigger and better show and I am excited to welcome Vince back to Slidell for the Bayou Jam Christmas Spectacular! ” said Slidell Mayor Greg Cromer. “I invite everyone to come on out to Heritage Park and kick-off the Christmas festivities with Vince Vance and the Valiants.”

Vince Vance and the Valiants are a country, pop, and rock ‘n’ roll group from New Orleans. This year, they are celebrating their 50th anniversary of performing. The group is known primarily for the single “All I Want for Christmas Is You”, which charted on the Billboard Hot Country Songs charts on six separate occasions. In 2005, Country Music Television proclaimed “All I Want for Christmas is You” the No. 6 Merriest Video of All Time.

Performances by Vince Vance and the Valiants are never short on entertainment, with costume changes, comic skits, and a vaudeville flair that make Vance’s shows unique and highly memorable. Vance is also widely recognized for his single “I am New Orleans,” a song composed in the aftermath of Hurricane Katrina. He was inducted into the Louisiana Music Hall of Fame in 2010.

Concert goers are invited to bring their chairs, blankets, ice chests, picnic baskets and sweaters and jackets to the park to enjoy the free concerts. Concessions will be available.