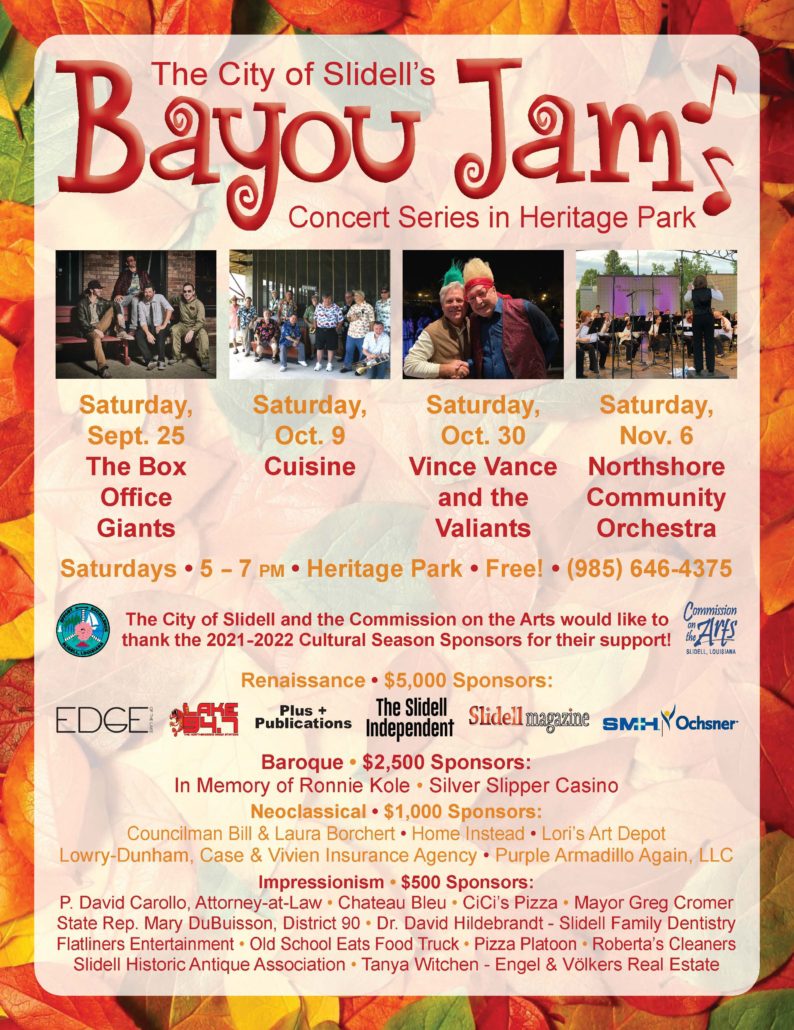 Get ready for the biggest Halloween party in Slidell! Vince Vance and the Valiants return to Heritage Park on Saturday, October 30 for the City of Slidell’s Bayou Jam Halloween Bash from 5 to 7 p.m. Kids of all ages are encouraged to attend in their Halloween costumes. Admission is free!

“Vince Vance and the Valiants has become a Halloween tradition here in Slidell,” said Slidell Mayor Greg Cromer. “Vince has been doing this for our community since 2005 and I invite everyone to come out and have a great time in Heritage Park!”

Vince Vance and the Valiants are a country, pop, and rock ‘n’ roll group from New Orleans. This year, they are celebrating their 50th anniversary of performing. The group is known primarily for the single “All I Want for Christmas Is You”, which charted on the Billboard Hot Country Songs charts on six separate occasions. In 2005, Country Music Television proclaimed “All I Want for Christmas is You” the No. 6 Merriest Video of All Time.

Performances by Vince Vance and the Valiants are never short on entertainment, with costume changes, comic skits, and a vaudeville flair that make Vance’s shows unique and highly memorable. Vance is also widely recognized for his single “I am New Orleans,” a song composed in the aftermath of Hurricane Katrina. He was inducted into the Louisiana Music Hall of Fame in 2010.

The Bayou Jam Fall Concert Series concludes on Saturday, Nov. 6 with a patriotic concert with the Northshore Community Orchestra from 4 to 6 p.m.

Concert‐goers are invited to bring their chairs, blankets, ice chests and picnic baskets to the park to enjoy the free concerts. While the event is outdoors, attendees should follow all state mandated health and safety protocols and wear a mask if they go indoors to use the restroom facilities. Please note that park regulations prohibit pets in the park as well as the use of skateboards, scooters, barbeque grills and glass items.