The following addresses are under a Boil Water Advisory due to loss of pressure on the water distribution system:

For more information on what to do during a Boil Water Advisory: https://foodsafety.ces.ncsu.edu/…/CDC-What-to-Do-During…?

Want to win a White Linen and Lagniappe poster signed by artist Keith Dellsperger? Participate in our digital scavenger hunt!

Head over to Google Maps and search Olde Towne Slidell for the five White Linen and Lagniappe posters perched on an easel and scattered throughout Olde Towne.

When you find all five posters, email the locations to Alex Carollo at acarollo@cityofslidell.org.

Make sure you select street view in Google Maps and change the date to July 2022 in the top left corner to be able to see the most current images with the posters.

The first five people to email the correct answers will win a signed poster!

The City of Slidell purchased the camera and equipment to keep Google Map images of Slidell updated regularly.

“In the midst of hurricane season, the City of Slidell is taking proactive measures to ensure that any storm related damages to our infrastructure is properly documented by taking before and after images of our streets and sidewalks,” said Blaine Clancy, City Engineer. “The images taken before a storm event will ensure that the City is properly reimbursed for any repairs that need to be made as a result of a major event.”

Head over to Google Maps and get started. Good luck!

The City of Slidell is looking for qualified candidates for several positions in the City. 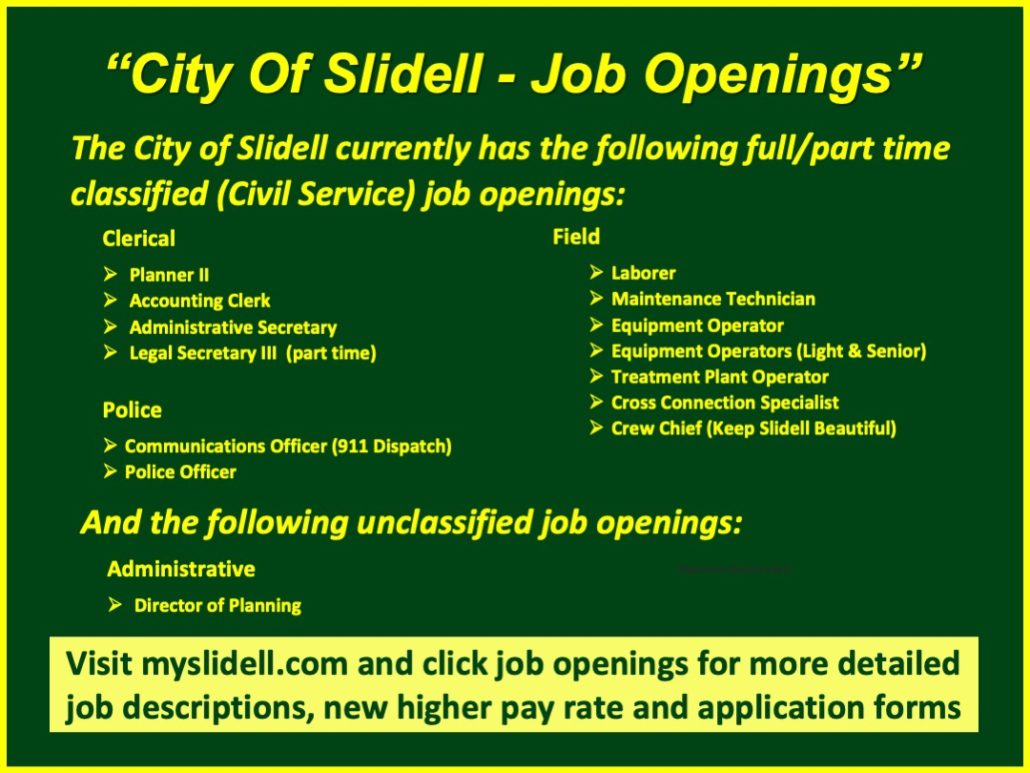 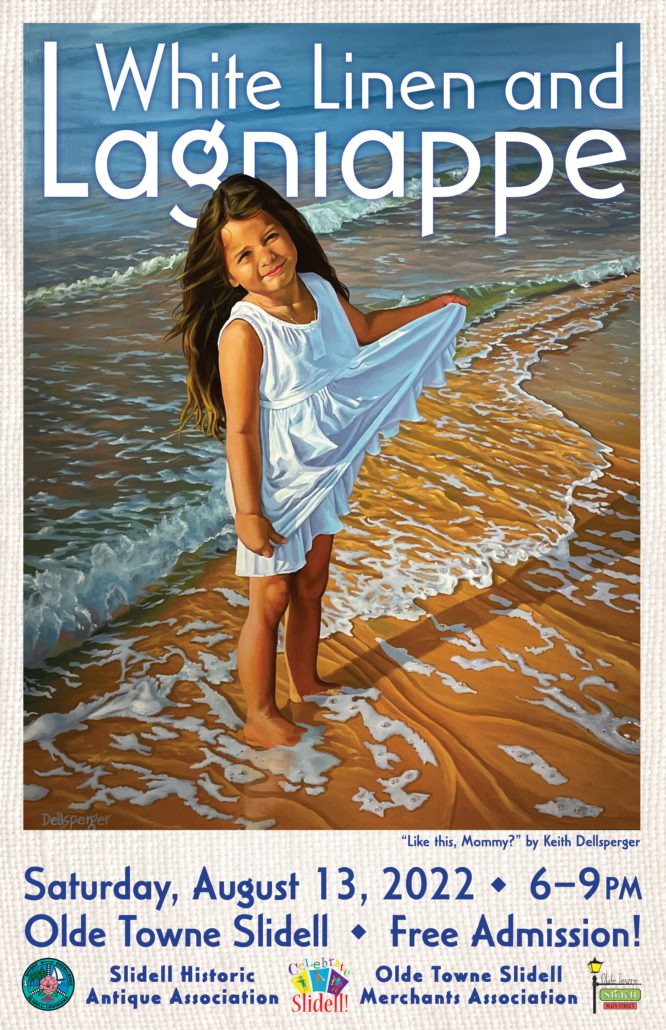 Slidell Mayor Greg Cromer, the City of Slidell, and the members of the Slidell Commission on the Arts would like to congratulate Keith Dellsperger for being selected as the White Linen and Lagniappe 2022 Poster Artist. His art work, “Like This, Mommy?” will be featured on the White Linen and Lagniappe poster and on the cover of the August 2022 edition of Slidell Magazine.

The fourth annual White Linen and Lagniappe takes place on Saturday, August 13, from 6 to 9 p.m. in Olde Towne Slidell. This family-friendly event features an evening of art, live entertainment, fine and casual dining, cool drinks, unique shopping and lots of lagniappe. Several bands will be playing during the event, including Witness and Audio Beach. Many of Olde Towne’s offices, restaurants, bars, shops, and stores will be open during the event to showcase their businesses.

Slidell artist Keith Dellsperger’s passion for creating art started at a young age while taking classes at David School of Art in Metairie. He attended all four years of art classes while at East Jefferson High School and continued his fine arts studies at Delgado Community College where he majored in Commercial Art. When he started a family, he had to put art aside to start a career, but thankfully he returned to art in 2009 and has been painting ever since.

Dellsperger serves on Slidell’s Commission on the Arts and is a past president of the Slidell Art League. His work has been displayed in numerous art exhibitions where he has won several awards, and his art has been featured on the cover of Slidell Magazine several times. In 2019, Dellsperger and his wife Kelly, both displayed their art work in their joint exhibition “All in the Family” at the Slidell Cultural Center at City Hall.

“I am truly honored to have been selected as the 2022 White Linen and Lagniappe poster artist. This year is extra special due to the fact that this event is returning to Olde Towne Slidell. It seems like it’s been gone for a lifetime since the pandemic began,” said Dellsperger. “With all that the City of Slidell does in the name of culture, I truly believe that our city does not get all the recognition and accolades it deserves for being a cultural community. I love being a part of the Slidell art community along with many other talented artists, and I hope that everyone comes out to Olde Towne Slidell to enjoy this event.”

During White Linen and Lagniappe, Dellsperger will be selling signed copies of the event poster at Dellsperger Studios, located at 1920 First Street in Olde Towne Slidell.

Slidell Mayor Greg Cromer, the members of the Slidell City Council, and Slidell Police Chief Randy Fandal invite the public to attend the City of Slidell’s 2022 Inaugural Ceremony on Friday, July 1, at 6 p.m. at the Slidell Municipal Auditorium. The public is encouraged to attend.

All City of Slidell elected officials will be sworn in, including:

The 2022 Inaugural Prayer Service will be held on the same day at 5 p.m. at Starlight Missionary Baptist Church. The public is also invited to attend.

Slidell’s newest piece of public art is now on display at the roundabout at Robert Blvd. and Brownswitch Road.

“Slidell’s Community Camellia Tree” is an eight foot tall iron and glass sculpture depicting a camellia tree in full bloom. It’s an artistic collaboration between welder Jamie Gomez, owner of JG Land and Marine, and artist Solange Ledwith of Swamp Girl Glass. Gomez constructed and welded the base, trunk and branches and Ledwith created the beautiful glass camellias that adorn the tree.

In addition to the sculpture, new landscaping will be added to spruce up the roundabout.

“I would like to thank the artists and everyone who worked so diligently on this project, said Slidell Mayor Greg Cromer. “We are so fortunate to have a thriving art community in our city. This piece of art is a great addition to all the murals around our city. We are honored to support our art community and are looking forward to more public art in Slidell.”

In 2020, the City of Slidell commissioned several local artists to paint murals around the city as part of the “Celebrate Slidell Public Art Project.” The murals not only celebrated Slidell’s culture and community, but also recognized the bravery of first responders and health care heroes in the midst of a pandemic. The new camellia tree is the first sculpture in the public art series and is hopefully the first of many that will be installed around the city.

“Helping to beautify our city and encouraging public art in our community is important to me,” said Solange Ledwith, artist and owner of Swamp Girl Glass. “It was great collaborating with Jamie and I would like to thank the City of Slidell for allowing us to be a part of this project.”

Glass camellias are still being added to the tree and members of the community have a chance to be a part of this unique public art project. Individuals can sponsor a camellia for $100 and it will be added to the camellia tree. Proceeds from sponsorship will help fund future public art projects. Checks made out to the City of Slidell can be delivered to Swamp Girl Glass located at 1060 Front Street or mailed to the City of Slidell’s Department of Cultural & Public Affairs, PO Box 828, Slidell, LA, 70459.